Songs to Mary, why? 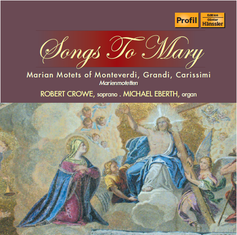 I have been asked where the idea came from to record the Marian motets of Monteverdi, Grandi and Carissimi.  All roads lead to Rome, or at least from Rome.  For me, Carissimi—that quintessentially Roman composer—has been the gateway and impetus to much of what I’ve done in the past five years.  I fell in love with his solo music years ago, and got serious about it in 2006, with the performances that led to the Carissimi recording.

I found a great deal of music that I wanted to sing, wanted to record, but that did not fit with the Holy Week theme of that first CD.  Two motets suggested a Marian theme (though Baby Jesus is certainly the star of Salve Puellule, Mary has her role) and the knowledge that Monteverdi and Grandi had both composed rapturous Marian music made the selection of this CD’s contents an easy task.  That is, until I tried to find an Ave Maria.  There are none—at least none that I could locate from the 17th century Italian treasury.  Caccini’s famous Ave Maria is not Caccini, but rather a talented Russian composer from the 1960’s.  The short, Gregorian Ave from 4th Advent has to serve as preamble to the rhetorical flourishes of a later epoch that cannot abide such a simple text.

It’s a matter of personal bemusement, that the career of a man who grew up as, and remains, a low church Episcopalian of that variety so common in the American South could choose to define himself by the heady, complex, Roman Catholic effervescence of the Counter Reformation.  It was a wonderful time to be a singer of sacred music—so many magnificent pieces for solo voice, free-standing and arrogantly disdainful of the clergy, the choir, the Pope himself—the shameless display of personal emotion and virtuosic excess.  From a liturgical standpoint, I suppose it’s just as well that this period ended and was replaced by the comparatively chaste, bounded arias of the likes of Vivaldi, Handel and Bach.  But for sheer joy of singing to the Lord—like David dancing with all his might—give me these!